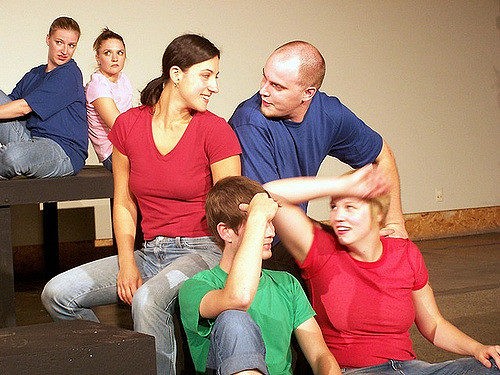 ‘How did I let myself get talked into this?’ I thought as I parallel parked my car on a busy street in downtown

Philadelphia. My heart was beating like a fast ticking metronome.

‘It’s not too late to get out of it’ I told myself. I was scared.

I was scared of taking an Improvisational Theatre course.

I got duped into it. My best friend, who had taken a 13 week course, had fallen in love with it. She was nudging me to sign up for the next series.

I didn’t budge. I don’t like being told what to do.

But when she dared me, I couldn’t resist. Once I grabbed the bait, there was no way out. ‘After all’, I told myself, ‘if she can do it, so can I.’

Studying improv pushes you out of your comfort zone.

It was all bravado on my part. I know people who are verbally quick and funny at the same time. I’m not one of them.

My wise elder self told the scared child in me that all I had to do was try the class once. If I didn’t like it, I didn’t have to return.

Repeating ‘Yes, I can, Yes, I can’ like The Little Engine That Could is an effective mantra for minimizing fear.

As I walked up the 3 flights of stairs, I kept on telling myself that I could do this. After all, I had studied acting and music, taken lead roles in plays, and loved public speaking.

But this was different. This was like studying classical music my whole life and now being told that I was going to learn how to play and perform jaz

Oh boy, was I ever out of my safety zone!

Once you understand that other students experience fear, it automatically diminishes the force of it.

When I walked into the room, I felt the tension. At least a dozen people were standing around making small talk. I joined in and quickly learned what had motivated each one to take the class. Some came because of friends who recommended it. But several had signed up because they had seen improvisational groups, like Second City or The Groundlings perform. It had ignited something in them.

As soon as the teacher walked in, a young woman with long, curly black hair and a huge smile, everyone stopped talking.

After the introductions, she explained that we were all beginners and nobody was judging us. She talked about the importance of trusting and having patience with others as well as ourselves, supporting our fellow students, and the need to risk ourselves and make mistakes if we want to learn improv.

Its foundation is built on rules.

She told us that contrary to what most people think, improv has rules and structure.

“Hmmm, rules” I thought to myself. “This is good. At least I’ll have some structure to guide me.”

RULE #1. Listen and stay in the moment. Focus on what the other person in your scene is saying and ABSOLUTELY do not prepare a witty response.

So you think it sounds easy? Try it and see.

RULE #2 – NO questions are allowed. Nada. Any response has to be a positive one building on what your team member has said to you.

As beginners, we were taught to use ‘yes and’ in part because one of the major tenets of improv is to always support the members of your team. If someone makes a mistake, it’s your job to make her look good and keep the scene going without a hitch.

Doing a simple scene correctly is similar to playing scales on the piano without making mistakes.

For example, here’s a scene about two college students who share a dorm room. Roommate #1 walks into the room and throws her books down on her bed.

Roommate #1: ‘What a long day I’ve had. I’m exhausted and feel like I’m coming down with a cold.

Roommate #2: ‘Yes, I see that your eyes are red. It looks like you could use a good hot bowl of soup.”

Roommate #1: ‘Yes, that would be terrific. I would appreciate some toast and honey with it.

Roommate #2: ‘Yes…and perhaps some cold medicine and going to sleep early would be a smart idea.”

That 4 sentence interchange may sound elementary to you but believe me when you’re new at improv, it isn’t easy to do.

Think about it this way. In a normal conversation, you might respond to your roommate complaining about her cold with ‘I told you that you were working too hard and now look what has happened to you’ or ‘Is there anything I can do for you?’

The first response is negative and doesn’t allow for a conversation to organically grow and perhaps evolve into an interesting story.

The second response, a question, is a reflexive one. You’d be surprised, even when you know the rules of improv, how easy it is to respond with a question. Not allowed.

By the end of the first class, all of us had participated in a scene 3 times. Between each scene, Bobbi made suggestions, noted the good points, and when we broke the rules, we were stopped and told to do it again.

During these 2 hours, there was a lot of laughter, vulnerability, and a sense of camaraderie and trust developing.

As I raced down those 3 flights of stairs after class to get to my car before my meter ran out and I got a ticket, I felt full of positive energy, excitement, happiness, and knowing that I wanted more of this.

I finally got it. I understood why so many people are madly in love with improv. It’s free play.

I intrinsically felt that improvisation was going to help me build some creativity muscles that I had never used.

I knew that I had hit a home run by listening to my intuition.

1.Take a leap of faith. When you feel fear overtaking you, don’t run from it. Rather have a chat with it. Find out why it’s bothering you. Let the little bugger know that you’re not going to let it stop you from doing what you want to do.

2. Maintain Beginner’s Mind. It’s easy to do in a beginner’s improv class. But even in an area where you may be considered an expert, work at keeping an open, inquisitive, and not ‘know it all’ mind set.
A phrase that my father passed down to me which I love is: “So much not to know.”

3. Embrace mistakes. Get to know and think of them as your guides and mentors. Without them, there’s no way you’ll improve and excel, let alone master anything.

4. Practice listening. Don’t pretend to listen. Really listen. If you catch your brain wandering or creating a pre-response, gently pull it back to the conversation. Take a deep breath and re-focus on what the person is saying.

It’s a skill that can be learned. The more you practice with intent, the better you’ll get.

5. Surrender – let go of control. The moment you give up the notion of needing to impress others is when the fun begins. Not knowing what to say or screwing up is the hallmark of learning your craft. It’s a great opportunity to learn to laugh at yourself.

6. Imagine – when you’re not in class, give your imagination free reign. Think of scenes that make you laugh. Create scenarios that are goofy, paradoxical, real – anything you want them to be. The more you practice using it, the easier it will be to access.

For a great example of a writer using his imagine effectively, check out Johnny B. Truant’s book, The Bialy Pimp.

7. Work your creativity muscles. All of the tips above..1-6…are elements of creativity. If you practice them, before you know it, you’ll be movin’ and groovin’ down creativity lane.

Oh yeh…and did I mention that improv is absolutely rip roaring, hilarious fun?

How An E.E Cumming's Poem Captures The Essence of Pure and Simple Love
How To Gain Confidence and Discover Your Creative Big Self
Share61
Tweet
Pin2
+1
Share
Stumble
Shares 63